Spamton finds out he's pregnant and tells Swatch about it :)

Nothing much to this, just self-indulgent fluff
Ao3

Spamton sat by himself in the bathroom of his and Swatch's home. His leg bouncing anxiously as he held his sweaty hands together, looking down at the clean floor.

On the counter was a pregnancy test, and the thing was taking its sweet time before letting Spamton know of its results. He wasn't convinced that it could happen, but those past weeks, he had started to feel off, nauseous, his mood occasionally volatile. It didn't make sense, but… Spamton wasn't fully comfortable with shaking off the possibility either.

He wasn't sure how Swatch and him would be able to pull it off, and with the different nature of their species, their inability to procreate was an unfortunate reality. The two had at times discussed the idea of children, to raise someone born out of their love, but it was all wishful thinking, a swatchling and an Addison could never have such a thing.

It was just life, Spamton had accepted, however, their desire for children had a tendency to intensify during their heat cycles. With Spamton craving parenting to an almost primal level, while Swatch tended to build nests and look after dud pipis despite both of them knowing they weren't the real deal. Spamton could sense that Swatch found comfort in the protective instinct, but deep down there was always a desire for more.

And it didn't help that weeks ago, the two of them had their cycles at the same time, only resulting in these sentiments intensifying. Spamton would whimper, his fingers buried into Swatch's feathers as he would breathe into their neck, he wanted a child, even if he knew they couldn't give him one. And Swatch would kiss his neck and face, holding their small mate close to them, all in the futile hope that just this once, it would be different, that they could watch over a real egg for once. And that their desire to have a family could be fulfilled.

These feelings would stabilize once they were off their cycle, but the idea still stuck, even if realistically, neither of them knew how to raise a child, and it wasn't like they would ever be confronted with the possibility.

Or so he thought.

Spamton looked up once the test let out a quiet electronic ding with the result. Swatch didn't know he was doing this, he didn't want to worry them with his own paranoia-induced thoughts, and even now, he was way too terrified to see the result. He closed his eyes shut as his shaking hands grabbed the small device. It would be negative, of course it would be negative, they didn't do anything different, why would he be pregnant? That was impossible!

But if it was so impossible, then why was he so afraid of opening his eyes?

Spamton took a deep breath, slowly opening his eyes as his heart dropped with what he saw. Clear as day, the plus sign on the test was unmistakable. But in case there were any doubts, the tiny visor beside it made sure to describe it if he was unsure.

Spamton was frozen, taking deep breaths as his eyes were locked into the plus sign. He was pregnant... HE WAS PREGNANT! What was he going to tell Swatch?! Would they even believe him after so many failed attempts?! Were they really as incompatible as he thought?!

He felt overwhelmed by emotion, anxiety, and fear but yet, he also felt… relief…? A quivering smile curled into his lips as he hugged himself for comfort, he was terrified, but also so happy and grateful, his chest filled with warmth and comfort. He had to tell Swatch! ...but how would he even? A surprise party? Something sensible like a special dinner? Or something lacking subtlety like an exploding pipis that would proudly display the words "HAPPY [[FATHER'S]] DAY !"

Spamton didn't know what approach to take, Swatch was at work, but he didn't want to make a huge fuss in public. At least not for something important like this. Would Swatch be happy? Spamton was almost sure they would, but another part of him was worried about their reaction. Maybe a big reveal would be overwhelming for the two of them.

He eyed the positive test on his hands, placing it on a small paper bag. Or maybe he didn't need a big fancy reveal! Truth be told, words had never been his strong suit. Instead, Spamton washed up, got dressed, and picking up the paper bag on his way out, he made his way to Castle Town's cafe.

It was just a few hours after lunch, and the cafe was quiet, with less movement and eyes on him, and certainly less inconvenient if disrupted by an announcement such as this. Spamton simply flushed at the idea of confronting Swatch about it. He knew he'd freeze if he even attempted to speak.

The bell in the door signalled his arrival, and at the cafe counter, he saw Swatch, casually drying some cups as they put them in place, neatly organizing them by colour. His shaking hands held the bag tighter when Swatch looked back at him, a smile forming on their beak in recognition.

"Oh, Spam, hey… You're earlier than usual." They casually spoke, noticing the frozen Addison at the door "...is everything alright?"

Spamton didn't respond, scurrying to one of the bar stools and climbing it until he was comfortably sitting. Swatch smiled and hummed pleasantly, starting to prepare him a drink.

"N-N0 CAFFEINE…" Spamton managed to stutter, getting a curious look from Swatch who nodded at their partner's odd request.

Swatch had noticed how quiet he was, but they could tell the gears were rotating in his mind. Spamton had a tendency to stall whenever he had something important to say, and Swatch was perfectly willing to let him take his time, acting casual as if to ease any pressure their presence could be causing.

"Vanilla black liquorice tea…" They spoke, placing the warm cup in front of him "Enjoy…"

"TH-THANKS…" Spamton blushed, he smiled timidly and took a sip, taking a deep breath as he tried to relax.

Noticing how quiet the cafe was, Swatch sat in front of him from the other side of the counter, offering a patient smile as Spamton looked back at them, his cheeks flushed and eyes wide open, unable to muster the words to tell them the good news.

"What's on your mind?" Swatch prompted, their feathered thumb rubbing circles in the back of Spamton's hand.

"U-Uhm… A l0t [Actually]…" He mumbled, looking down at the paper bag he kept on his lap "I… I H4VE AN [Exciting Announcement!]"

"That eases my mind…" They smiled, "At least it's good news."

Spamton blushed and nodded, taking another sip from his tea and then holding the paper bag in his lap "IT'S [[Special Delivery]] JUST FOR Y0U !”

Swatch simply blinked at him, adjusting their glasses "Consider my interest peaked."

Spamton looked excited, handing the paper bag to the bird and nervously kicking his legs.

Swatch looked around the bag, as if unsure whether to open it or not "This…" They looked at Spamton "You said you're cooking something in here?"

"IT'S NOT FOOD ! 0PEN IT !" Spamton grinned, his leg nervously bouncing.

Swatch looked surprised and nodded. Spamton watched anxiously as they opened the paper bag and held its contents, their eyes skimming through it.

Swatch was static but their feathers rose and their eyes widened as they quickly put the positive pregnancy test back in its discreet bag. They took a few quiet breaths, looking back at Spamton who was a flustered mess, hugging himself with the biggest smile on his face.

"I-Is… Is this…" Swatch quietly whispered as Spamton took notice of how their tail had begun to wag.

Spamton simply nodded, finishing his drink and putting it aside as he fiddled with his hands "S-Surprise…!" He waved his hands, laughing nervously.

Swatch's shocked expression shifted into a surprised smile as they began to laugh and tear up, getting up and quickly making their way around the counter to hug Spamton close, making him yelp in surprise as he began to laugh as well, getting picked up and cackling as Swatch filled his face with kisses.

"I don't care anymore, I love you so much…" Swatch smiled grateful, loosening their tight hug on Spamton just a bit "M-Maybe I shouldn't hold you like this… For the…"

Swatch flushed and nodded, headbutting him gently and preening his hair "And to think you were bringing me a snack…"

"I CAN BRING Y0U ON3, [Better luck next Time]..." He snickered, indulging in Swatch's affection "W0ULD YOU PR3FER THAT?"

"No..." They smiled gently "I wouldn't trade this for anything else in the world…" 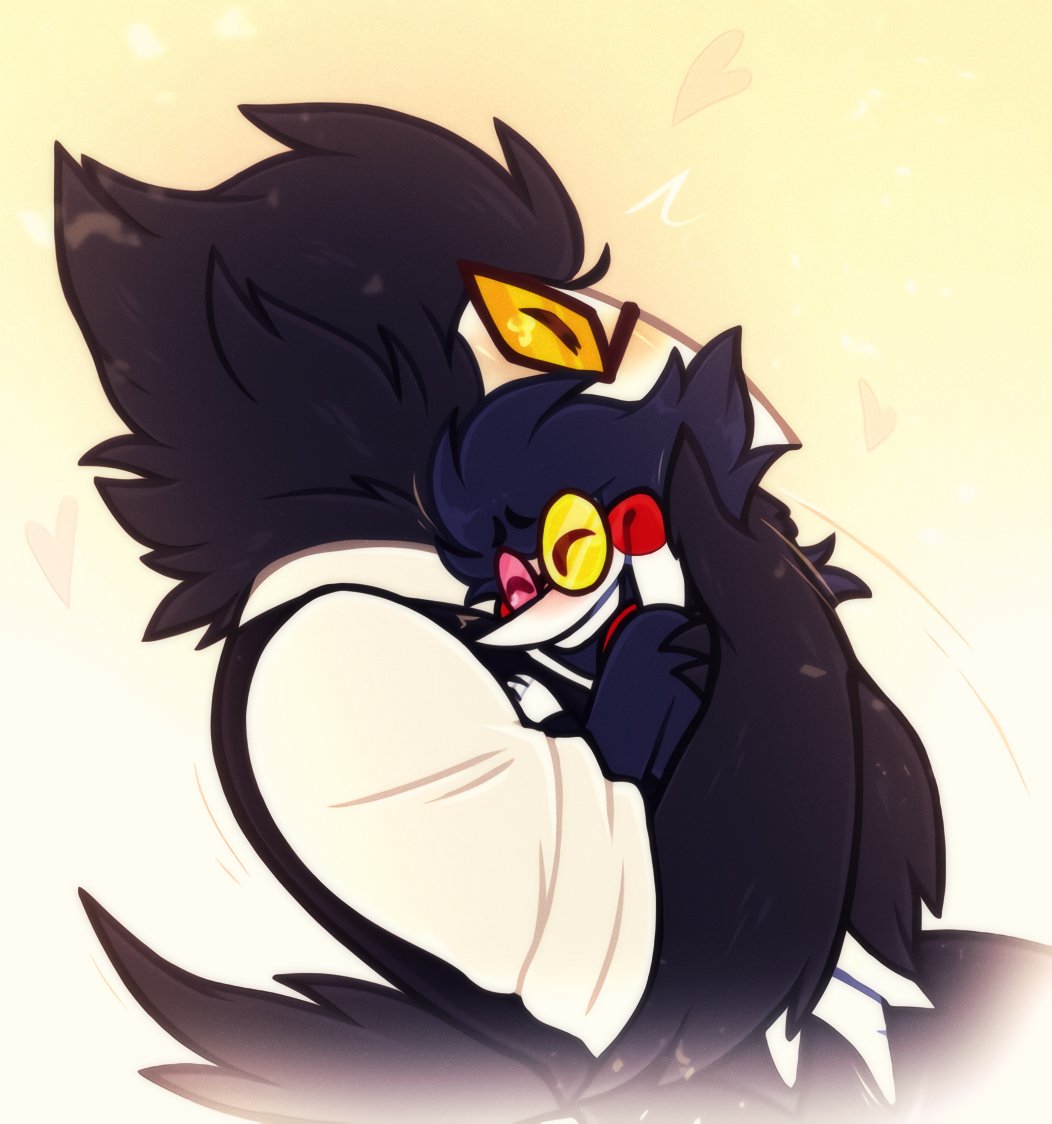