Spamton wakes up and realizes that a part of his memories are missing and he did something really bad that he can't quite recall. However, he's now living in Castle Town and ready to embrace a fresh start when he meets a familiar face.
Ao3


Spamton G. Spamton/Swatch, Other characters are mentioned but not worth getting tagged, Spamton has abandonment issues and a fat crush on Swatch, Swatch finds Spamton in the trash and takes him home is a good trope and I want in, Post NEO fight, tags will be added as i continue, Spamton can fit so much trauma in him, Anxiety Attacks, PTSD I guess??, Nudity, But like in a ball joint doll sort of way, Touch-Starved

Not long after, Spamton sat in the middle of the tub, water up to his shoulders as he was holding on to the rubber swatchling toy which was now yellowy-orange coloured. Swatch had attached the shower hose to the tap, allowing for warm water to fall on the puppet's head and hair. He sat almost motionless and doll-like, as his eyes widened at the sight of the water getting darker. Just how much oil did he use? How long had he been living outside?

Swatch was in the process of cleaning his hair, but as they noticed how quiet Spamton had gotten, they placed their hand on his shoulder, getting him to flinch and look back at them, his expression uncertain.

"Are you alright?" They asked, "Forgive me if I have been pushy regarding this…"

Spamton just shook his head, returning to his original position, closing his eyes as he felt their hands in his messy hair. "I'M [Fine], ACTUALLY. I J-JUST DON'T UNDERSTAND [Why are you being so nice to me] ? I DON'T HAVE ANY [[One Part Payment]] TO GIVE YOU YET…"

"Yet…? What do you mean?" Swatch asked, "Spamton, you don't owe me anything, I'm simply trying to help you…" They spoke, noticing how the Addison's hair was becoming grey in colour, making them tilt their head in confusion.

"WELL BUT THAT W0N'T DO! [Nothing in life comes for free!] I NE3D TO REOPEN BUSINESS!” He spoke as Swatch took notice of a strange optimism in his voice. "NEW [[Beloved customers]] IN THIS NEW [HomeTown] MEANS [[New Opportunities]] TO MAKE A SALE !"

"Are you certain that's what you want to do?" Swatch offered a smile and Spamton looked back at them as if offended.

"OF COUR5E! I'M STILL AN ADDISON, IT'S IN MY [[Guts]] TO OFFER [[Great Deals]] ! AND THIS TIME I'LL DO IT WITHOUT ANY [[Free Hand-outs]] !" He seemed determined in his words and Swatch signalled for him to stop moving.

"And how are you going to do that?” They asked absentmindedly, smiling as this type of conversation reminded them of the ones they'd have at the café, even if Swatch was often too busy to properly respond to him at the time, Spamton did seem to have a tendency to go off about his plans for his business. Almost as if he rarely had anyone who bothered to indulge him.

"It's alright. I'm certain that you can figure something out." They smiled, their gaze still on the puppet's hair "Uhm… I did not know you dyed your hair. What colour is it usually?”

"H-H0W [[Bad]] IS IT?!" Spamton nervously asked, his murky reflection not letting him see what he looked like.

"It's... grey…" Swatch spoke curiously, seeing as whatever dark substance was covering the puppet's hair had yet to be removed. "What in the angel's name have you been doing with this…? " They continued cleaning it off and Spamton just let out a half-hearted chuckle.

"Wh-White…? Are you saying your hair is white ?” Swatch looked surprised by this claim, seeing Spamton holding the rubber toy closer and nodding. "That… That sounds quite lovely actually… Why would you want to cover that?”

The puppet was quiet for a bit, letting out a sigh "SWATCHY... H4VE YOU EVER SE3N A [[White]] ADDISON?” He spoke as the bird flushed a bit at the use of the strange nickname.

Swatch smiled tenderly, Spamton's hair was becoming a light grey "But that's not correct, is it?" They asked, getting a confused stare from the Addison.

"White is not the absence of colour, but rather all colours combined as one." They gave him a gentle smile, noticing a visible blush on Spamton's face as his eyes widened. "It is almost rather poetic if you ask me… Rather than being nothing, the fact is that you are actually everything… A white canvas of endless possibilities... Every colour as one…"

". . ." Spamton had a clear flustered face and looked away, getting Swatch to chuckle in response, rubbing the back of their head.

"Right. Forgive me for getting carried away. Colours are my area of expertise as you know."

Spamton didn't even know how to respond to that, his heart felt like it was pounding out of his chest, ready to burst out at any moment. The Addisons often made him feel bad for his condition, but Swatch's words just filled his heart with warmth.

"That is the nicest thing anyone has ever said to me…" Spamton mumbled timidly as Swatch gave him an odd look. They reminded themselves to inquire about his fluctuating glitch later on.

As the water kept flowing, Spamton took notice of how it got less dark the more Swatch cleaned his hair. He could actually see his reflection on it, but he was too afraid to look at the result, not like he'd have that much success telling things apart without his glasses anyway.

After a while, Swatch closed the tap, and Spamton heard them shuffling behind him. He looked back to see Swatch looking through their shampoo bottles and as they noticed him, they offered a smile. "I’m almost done. I apologize for taking so long."

"Hehe…" Swatch chuckled "You do not have to pay me anything… I am simply helping you as a friend."

"Well… Only if you'll have me. I hope you do not hold a grudge about the past, Spamton. When I was escorting you out of the mansion, I was simply obeying the Queen's orders."

The puppet nodded quietly, looking at the Swatchling toy in his hands, which had finally reached a red colour. He still felt Swatch's fingers cleaning his hair and he could already feel his head significantly lighter than before.

When Swatch turned on the hose again, Spamton lifted the rubber swatchling to show them, an excited smile plastered on his face.

"LOOK. IT'S FINALLY [[Red]] !" He spoke, getting Swatch's attention as the bird looked surprised and smiled back.

"Oh, would you look at that?" They seemed to laugh and began cleaning the shampoo off the puppet's head.

"THIS IS AN [[Excellent Product]] !” Spamton smiled and as he felt the water on his head, he sighed relaxed with how soft his hair felt already. However, he couldn't help but dread what he was going to see when he looked in the mirror.

As Swatch closed the tap and began to drain the tub, Spamton nervously looked for one of the towels that Swatch had given him. "WHERE ARE THE [100% Clean] TOWELS? I'M STARTING TO FEEL [[Exposed]] !" He nervously spoke and Swatch laughed quietly, reaching for a clean towel they had placed nearby.

"I do intend to let you keep your dignity, Spamton. Do you think so little of me?" They gave him a teasing smile and Spamton flushed, shaking his head and grabbing the towel. As Swatch turned, Spamton climbed out of the tub and simply covered himself with the towel that was slightly too big for him.

Swatch seemed to flinch with this, looking back at Spamton in surprise "Oh! D-Do you want me to leave so you can dry yourself in peace?"

Spamton seemed embarrassed, for a moment he had gotten used to just sitting naked with Swatch there, but it was kind of weird when he thought about it. It wasn’t like there was much of him to look at, but he wasn't sure whether that made it better or worse. "OH, B-BEFORE Y0U GO…!"

He dried his hair to the best of his ability with the large towel and then properly wrapped himself, looking back up at Swatch with a sheepish look "I'M [Sorry], COULD YOU [[Help]] LET ME CHECK THE [[Mirror Mirror on the Wall]] ?" He rubbed the back of his head and Swatch looked surprised, nodding in response.

They cleared the fog off the mirror and grabbed Spamton once again, holding him up to the mirror. Spamton rubbed his eyes and squinted, leaning forward to see better. In the mirror he saw Swatch, their expression was firm yet gentle, and in their arms was a white shape with pale pink cheeks, wrapped in a white fluffy towel that blended with it.

Spamton flushed and raised his arm to pass his hand through his hair, now as pale as his own skin. But the texture was so soft, not heavy and sticky, it was unlike anything he could remember. However, something seemed to catch his attention. Were those… rainbow reflections…?

"What do you think?" Swatch looked down at him "Your mention of "pearly whites" reminded me of my iridescent shampoo. While it is primarily made for feathers, it also works on normal hair. I thought it would look quite pleasant on you."

Spamton would have protested, but he couldn't help but move his head and catch all the small glimpses of colour that would show up. He recalled Swatch's words and for a moment it made sense to him. He was every colour combined as one and his heart skipped a beat.

"I… I [Love Yo- IT!! I L0VE IT!" He had a giddy and flustered smile on his face as he placed his hands on his cheeks and looked up at the bird.

"You do…? Well, I'm glad to hea—” Swatch stopped as they felt the puppet stop to turn and hug them. His short arms could hardly hold their waist but the Addison still had a content smile on his face, and Swatch simply patted his head gently with a smile on their face.

"It’s nothing… I was going to offer to get some proper dye for you tomorrow. Will that not be necessary?"

Spamton looked surprised then glanced back at the mirror. With how much he was squinting his eyes, he truly looked like a proper Addison again. Albeit he was still a defective mess, dipped in acid with a glitch on top, but for a moment, none of that seemed to bother him anymore.

"Very well then." Swatch smiled and placed him on the floor again "Dry up. I will go fetch you something to wear, and if you don't mind, I would like to clean up as well."

"A-AH OF COURSE [[Course]] ! ANYTHING [[For you]] !” He flushed as he said this but Swatch did not seem to notice, humming to themselves as they left the bathroom. Spamton caught a glimpse of their tail feathers, which too had similar glimpses of pearly colours on them. So that was why Swatch always looked so shiny…

As he watched them leave, he quickly dried himself off, feeling much lighter and more relaxed. He couldn’t recall the last time he felt like that, but he wanted to cling to the feeling for as long as he could.

Thank you for reading, here are some doodles I made to illustrate some scenes that took place ^^ I wanted to do something like this for previous chapters, but I was caught up with commission work so I didn't really have the energy to do any of that haha 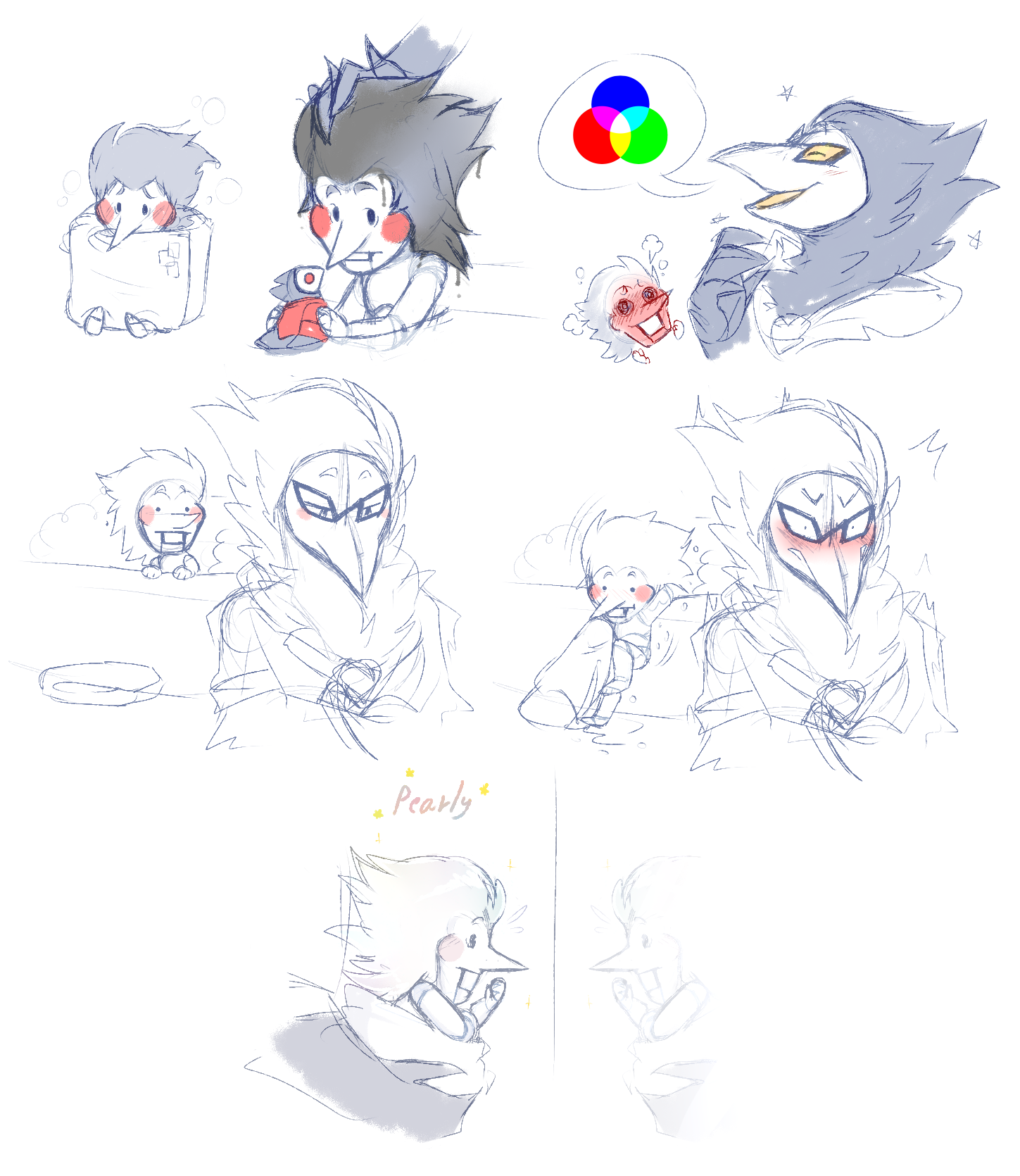